Below is a guest post from Becky Yoose, whom I am proud to count as a colleague, mentor, and friend.

Disclaimer – the following post represents the personal views of the author, and does not necessarily represent the views of her company, LDH Consulting Services.

Last June, the Santa Cruz Civil Grand Jury released a report about their investigation into Santa Cruz Public Library’s use of Gale’ Analytics on Demand to analyze patron data. The findings of the report included that SCPL did not properly inform patrons about the use of AoD, nor obtain consent from patrons to use their data in AoD, nor follow industry best practices – the list goes on. Overall the report found that SCPL use of AoD put patron privacy at risk. [1]

While the findings and recommendations from the civil grand jury report are not legally binding, the jury required the SCPL Director to respond to the report by September 23rd, 2019. The director’s response to the Santa Cruz Civil Grand Jury Report has been published and, well, it’s a hell of a mixed bag.

The response is divided into two sections: findings and recommendations. The recommendations section gives me some hope. SCPL created a new page about data privacy, posted their vendor assessment questionnaire, and even plan to do another round of privacy policy revisions after additional training. The recommendations to put in a more formal privacy program seem to be accepted, though from the response there is very little information about the “who, what, when, where, and how” of the implementation, including who exactly the new data privacy officer is for SCPL.

While these steps put SCPL on the right track in protecting patron privacy, the findings section tells a completely different story, and a troublesome one at that.

Overall, the director did not directly respond to the findings themselves, with the exception of a couple of findings. The major themes in the responses include:

Let’s break these three themes down.

The state law ultimately permits use of AoD

The director of SCPL uses this line to respond to the following findings:

What difference does it make if the grand jury concluded that use of AoD was ultimately allowed under current California law? That statement does not address the failures of the director’s library to make sure that the privacy policy reflected current practices, that patrons knew and understood how the library was using their data, and that there was a documented legal review of AoD before use. [2] The law might allow it, but that doesn’t necessarily mean that it makes it ok to do it. [3]

This response was used by the director in:

This again is where compliance-only thinking by library administration is not in the best interest of patron privacy. Yes, legal regulations don’t cover everything, and they can’t—technology changes outpace technology regulations. The director is plainly stating that if the law doesn’t say anything that they are not doing anything wrong.

Let’s rephrase the above—this is a library director who is saying that letting patrons know that the library is using patron data in an analytics program isn’t important, nor is getting patron consent for said use, because the law doesn’t force the library to do so.

Other libraries use AoD

The director used this line in their response to F7 – “The use of Gale Analytics on Demand by Santa Cruz Public Libraries is inconsistent with best practices in the library community regarding patron privacy.”

This, dear readers, is where I introduce you to the cookie jar. 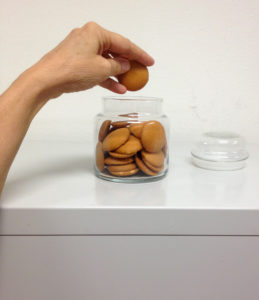 Overall, whatever gains we had in the recommendations section are overshadowed by the findings section. A library director not only oversees library operations, but sets priorities and strategic goals for the library. The library director has an overwhelming influence on organizational values, including how the library serves its patrons and its communities. Having a library director respond to privacy concerns brought up by members of the community—members who could also be patrons of the library – with dismissals and compliance-only responses sends a message to the community and the library staff that the library does not prioritize patron privacy beyond doing the bare minimum.

Why would the findings responses overshadow what’s already been done based on the report recommendations? Again, the library director sets the priorities, including where resources are spent and empowering staff to meet patron and community needs. A library director like the one we find in the responses in the findings section is less likely to fully fund a privacy program or give the assigned data privacy officer agency within the library to develop, implement, and assess privacy practices at the library. Any effort will end up being short lived, choked by lack of resources and staff agency.

I worry that many other library directors will adopt this type of response strategy when dealing with their communities’ concerns about privacy practices. This type of messaging is damaging not only to library staff who strive to protect patron privacy at the library and to the trust that patrons have in the library to protect their privacy, but to librarianship on an ethical level. In response to F1, the SCPL library director quotes Article VII of the ALA Bill of Rights:

VII. All people, regardless of origin, age, background, or views, possess a right to privacy and confidentiality in their library use. Libraries should advocate for, educate about, and protect people’s privacy, safeguarding all library use data, including personally identifiable information.

[2] There is no documentation in the report or response proving that the library performed such a legal review of AoD. It can be argued, then, that the civil grand jury did the legal review for them.

[3] For example, you can be in compliance with legal regulations and still have a privacy breach in the form of an ethics breach. The library profession has a few ethics codes, including codes of ethics from ALA and IFLA. Patrons also have rights in the library as outlined by those organizations as well, and those rights can be at odds with legal regulations.